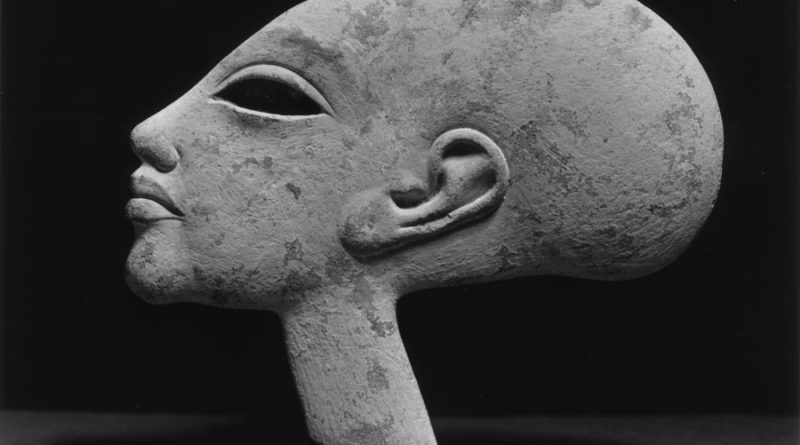 These days people use crop circles, animal mutilation and appearances of Men in Black as signs that aliens visit the Earth. But what about in ancient times? It turns out there’s a lot that can’t be adequately explained. 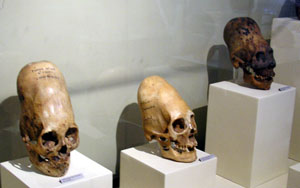 In 1928 Peruvian archaeologist Julio Tello was exploring the desert peninsula known as Paracas. While there he discovered an ancient tomb, at least two thousand years old, and inside was a collection of mummified remains in seated positions in baskets. However, they didn’t look quite human. The skulls were huge and stretched up at the back, containing enough space for much bigger brains. Tello found some 300 skulls and wondered what they were. Could they be a new species of hominid? Or something else altogether?

An explanation given by The Smithsonian is that these are simply human skulls that were purposely deformed as part of a cultural practice. The skulls of babies are quite soft and so by binding the head in a certain way, the pressure could force it into an elongated shape.

But in 2014 Paracas Museum assistant director Brien Foerster had the DNA on the skulls tested. The results, he said, showed DNA with mutations unknown in any human, primate, or animal known so far. However, some have questioned Foerster’s scientific credentials. 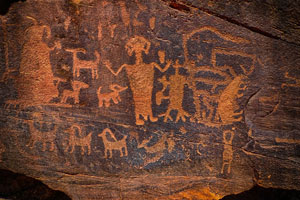 Prehistoric rock carvings, known as petroglyphs, illustrate the ways that out ancestors recorded their daily lives, as well as their stories and general view of the world.

It seems strange, then, that all over the world many petroglyphs seem to relay advanced intelligence or depict extraterrestrial life.

Take the Valcamonica rock drawings in Northern Italy. Among the 140,000 striking symbols carved over 8,000 years, two figures appear, with their heads enclosed in semi-circles and floating in space, they look uncannily like astronauts. Could they be depictions of an advanced ancient alien race that had been seen by locals?

Spanning 800 kilometers along the Tagil River in Russia, the Ural pictograms also seem to contain some astonishing information that humans couldn’t have known in prehistoric times.

Some stick drawings perfectly match up with modern chemical structures, like plastics, polyethylene, and polyvinyl chloride as well as graphite. Many people believe that this is simply a coincidence, though. 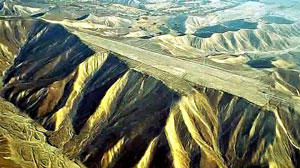 If you ever go to the mountains around Palpa in Peru, you will see something unmistakably strange. Some of the mountains have no top whatsoever. It seems as if the peak has been sliced clean off, despite the neighboring mountains having normal peaks.

While the standard explanation would be erosion, some claim that the edges of the plateau are far too clean and not crumbling like they would in the case of erosion. In fact, if you look closely at some of these ancient sliced mountaintops, they look suspiciously like aircraft runways.

The television show, ‘Ancient Aliens’, claimed that these were actually airports, but from over a thousand years ago.

Could they have been used for take off and dockings by ancient UFO’s? After all, this area is not too far from the location of the Paracas skulls. 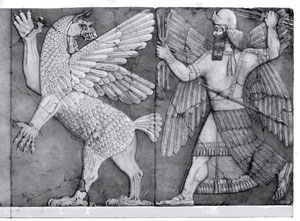 For tens of thousands of years, humans were struggling hunter-gatherers, and then one day this all started to change. Civilizations sprang up, cities were built, and agriculture was developed.

When looking at how human civilization began, one should go back to one of the world’s oldest: the Sumerians, who were based in Mesopotamia 6,500 years ago.

The Sumerians had cities and agriculture, but they also possessed a peculiar view of the world. They talked of beings called the Anunnaki, who were like extra-terrestrial Gods with the power to ‘travel through the sky’. According to the Sumerians, they had come from Nibiru, possibly a planet, to seek gold.

In the stories, the leader of the Anunnaki decided that mining gold was too intensive, and so his son decided to create humans to work for them. But is this just a story, or could the Anunnaki be real? Aliens who are capable of intergalactic flight would certainly seem like gods.

Are the Sumerians describing the literal creation of humankind through genetic engineering of apes? If so, where are the Anunnaki now? Back on Nibiru or closer to hand?

The Moai, or Easter Island Heads, are monolithic sculptures that were built and erected some 700 years ago in Polynesia.

The question is, when each of these statues weighs around 14 tons, how could the islanders have possibly moved 900 of them over distances that went into tens of kilometers?

The islanders themselves have a myth that the Moai walked, but author Erich von Daniken has a different theory. In his book, ‘Chariots of the Gods’, he describes how alien beings had once found themselves stranded on the island. To allay their boredom, they bestowed the inhabitants with the knowledge and skills to create the Moai.

And in terms of transport, although barren now, the island was forested in the past. So it seems entirely possible that a combination of ropes and logs could have moved the Moai, rather than extraterrestrial beings. 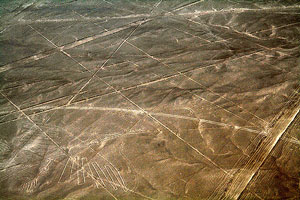 400 kilometers south of Lima, in Peru, you may stumble across some rather uninteresting patches of gray earth, where the normal red pebbles have been swept away. It’s only when you take a bird’s eye view that you are able to grasp the magnitude of this UNESCO heritage site.

When viewed from hundreds of meters up, these patches suddenly reveal themselves to be huge pictures of animals: a monkey, a hummingbird, a spider, and a person.

But there are even more lines. Perfectly straight lines that stretch from kilometers, lines that form geometric shapes and criss-cross along valleys. Professor Paul Kosok called this ‘the largest astronomy book in the world’, after finding that some of the Nazca lines even align with the sun during the solstice.

It seems they were constructed over a thousand years, but how could this be when they only seem to reveal themselves from the air? Could aliens have guided the humans in the building of these huge structures, with the aid of flying craft to survey the land?

It’s certainly what some believe, and after all, this idea isn’t that far removed from the Palpa flat-top Mountains. However, it should be noted that the designs are visible from neighboring hills. 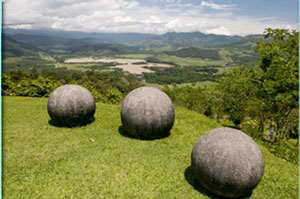 Also marking the movements of the heavenly bodies are ‘Las Bolas’, some 300 stone spheres scattered through Diquis Delta in Costa Rica.

First seen by outsiders around the year 1940, when the United Fruit Company came to town, they have astounded scientists and archaeologists alike.

While some do chart the stars, the vast majority seem to have no purpose whatsoever, leading many to postulate about their use.

The modern opinion is that the people of the Diquis culture crafted them by carefully chipping away, before using them as a currency of social standing in the community.

But author David Hatcher Childress have claimed that these thousand years old balls must have been made with power tools, specifically because of the rock type and their near-perfect spherical shape.

Childress also claimed that the indigenous people didn’t make them, but simply discovered them in the jungle and thought them to be the work of gods.

So could ancient aliens have crafted these balls? And if so, for what purpose? 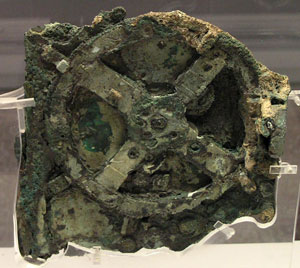 Discovered at the bottom of the Mediterranean Sea at the turn of the 20th century, the Antikythera Mechanism is a remarkable piece of Ancient Greek Technology. It is unlike anything ever seen in ancient times and was actually ignored for 75 years before its true wonder was uncovered.

A close inspection of the metal contraption reveals something somewhat like the inside of a clock: gears and cogs with triangular teeth, rings divided into degrees, dials, grooves, and rotating balls.

The physicist Richard Feynman remarked that for the time it was ‘so entirely different and strange that it is nearly impossible’. The device can predict astronomic events, tell the date, and even comes with an in-built instruction manual, basically making it the world’s first analog computer.

Nothing came close to this in technology for 1,500 years, leading many to believe that this is an alien artifact. 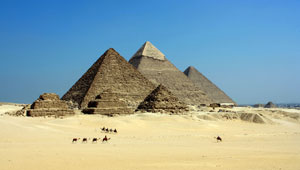 Everyone knows of the pyramids, but do we really know how they were built? The case for aliens states that the pyramids are simply too impressive. They aren’t just large, triangular piles of rock, they were also perfectly aligned to the magnetic poles at a time when compasses hadn’t been invented.

They have such precisely angled slopes that technology at the time wouldn’t have permitted humans to achieve this. And then there is just the weight of all the rock alone.

Another eerie point is that the 3 pyramids of Giza are aligned similarly to the stars in Orion’s Belt. A calling card perhaps?

Finally, in one of the temples, hieroglyphs seem to depict aircraft like a helicopter, which allegedly could have been used by aliens to survey the site.

How likely is this? Well, many scientists think humans could have achieved the building of the pyramids without help, through ingenious engineering techniques and knowledge of mathematics. What do you think? 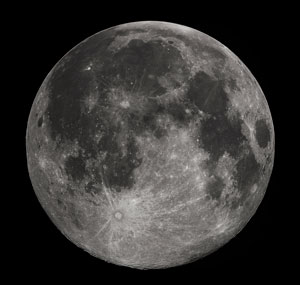 Have you ever wondered how the moon got there? Scientists certainly aren’t sure, although one theory states that a giant meteor blasted a chunk of the young Earth into space.

But the moon orbits the Earth almost perfectly; it can precisely block out the sun and creates our tides. Could this be by design?

The hollow moon theory postulates that the moon is an artificial satellite put into orbit by ab advanced alien civilization. Some have further claimed that such aliens would not put something useless in the sky and that it must be a giant, dormant spaceship, possibly a ‘Noah’s Ark’ of sorts, containing aliens.

None of our missions to the moon have ever penetrated the crust or hull, so we still do not know for certain. 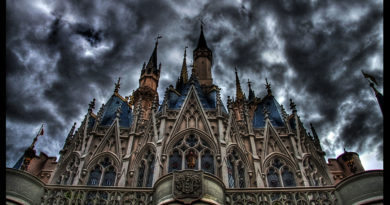 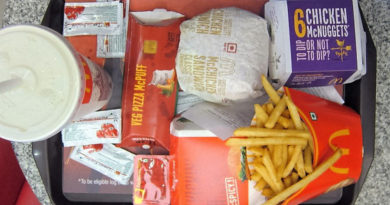